The floor of the Central Courtyard is actually a roof that covers critical infrastructure, including electrical equipment and control panels that help keep power, heat, and hot water operating in the Capitol. The existing membrane roofing on the courtyard is damaged when it rains: water seeps through the membrane, gets trapped underneath, and leaks through to the equipment. This resulting damage could leave the building without HVAC or hot water.

In addition, the copper cladding and roofs over the passage and former restaurant can no longer be soldered or repaired — they are more than 120 years old and have outlived their intended lifespan.

Right: Rendering for the new courtyard.

About the Project
How This Impacts You

We’ll let you know ahead of time when work hours change throughout the project.

Thank you for your patience during this important project!

A Brief History
The Hawk Street Passage and Central Courtyard

A central courtyard was important to the design of large public buildings when the Capitol was built in the 19th century. Like others, the Capitol’s Central Courtyard introduced light and fresh air into the building because artificial light and ventilation systems were not yet common.

The first Capitol architect, Thomas Fuller, planned a center courtyard so visitors could access the space from each of the four courtyard walls, and to provide a point of reference to navigate the building.

The second architects who worked on the Capitol, Leopold Eidlitz and Henry Hobson Richardson, also included a central courtyard in their plans. They left a four-story space, 137 feet long by 92 feet wide, open to the sky, and surrounded it with ornate granite walls that mimicked the exterior street elevations. Stained glass windows enhanced the upper floors of the north and south elevations. The extensive decorative treatment of the walls is unusual in a courtyard and add to the Capitol’s unique features.

Throughout the 30-year construction of the Capitol, builders used the Central Courtyard as a construction staging area for building materials and cranes. By the 1880s, a series of covered passageways divided the courtyard along the north-south axis.

In 1889, builders erected an enclosed wood frame structure through the center of the Capitol’s courtyard to allow pedestrians to continue south. The original passage protected pedestrians from walking through the construction staging area for the stone hoisting and setting equipment used to build the Great Western Staircase.

That same year, one block north of the Capitol, builders constructed the Hawk Street Viaduct – an engineering marvel at the time, credited as the first cantilever arch bridge in the world – that created a walkway from the wealthy Capitol neighborhood to working-class Arbor Hill. (It fell into disrepair, closed to traffic in 1968, and was demolished in 1970.)

By 1899, architects added the permanent, present-day Hawk Street Passage between the north and south entrances.

New York State added a restaurant and cafeteria in the western half of the courtyard in 1923. Diners entered through multi-pane double doors in the Hawk Street Passage.

Over the next three decades, the state added modern storm windows, marble wainscoting, and lower ceilings to the restaurant and to the Hawk Street Passage – but filled in the windows that allowed visitors to see into the Central Courtyard. 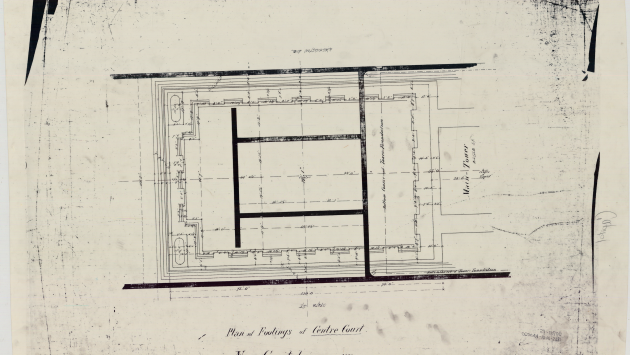 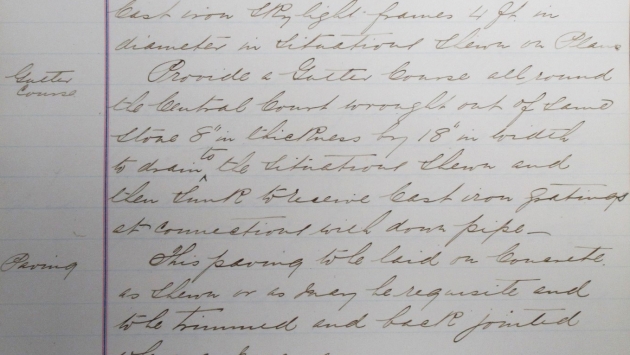 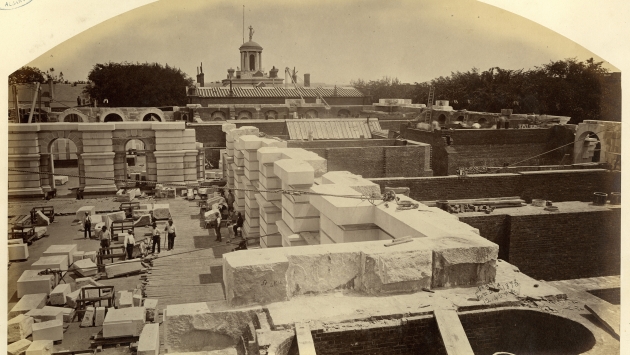 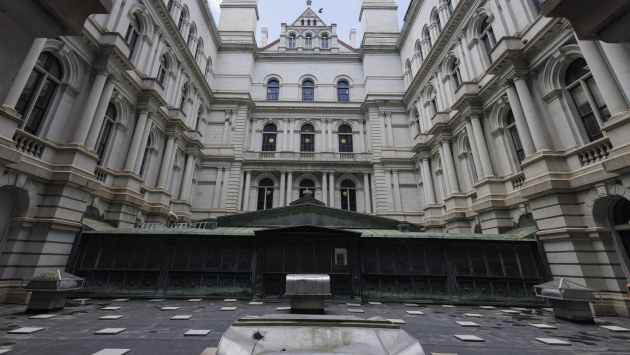 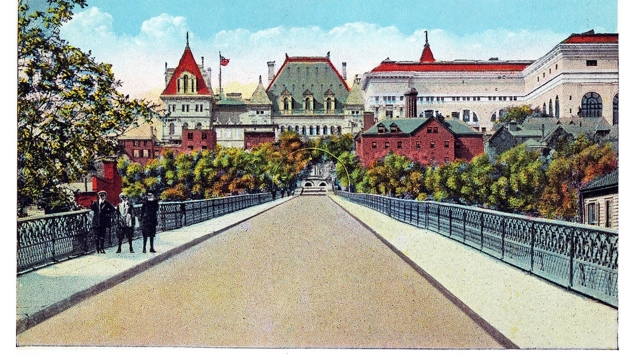 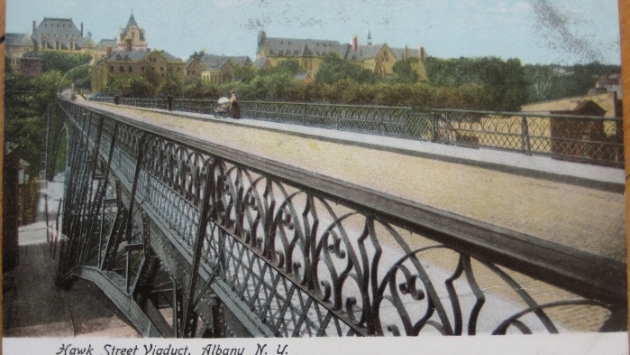 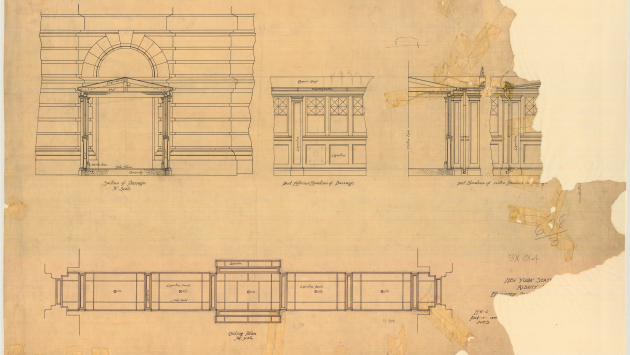 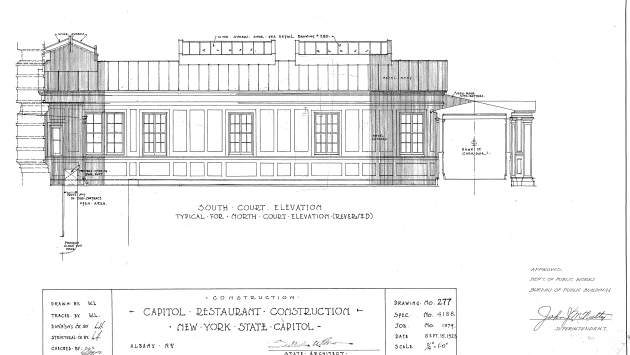 An original plan for the Courtyard, 1860s.

Construction of the Capitol and Central Courtyard, 1873.

Plans for the Capitol restaurant, 1923.

About the Project
Historic Courtyard Features

Beneath the courtyard, granite piers are topped by brick arch and groin vault construction. At the center of each groin vault is a four-foot diameter opening which originally contained cast-iron manhole frames and covers pierced by solid glass lights two to three inches in diameter – what Fuller called “sidewalk lights,” or skylights, to bring daylight into the basement.

When the state modernized the courtyard pavement during the 1950s, most of the manhole “skylights” were decked over or filled with ventilating equipment. Today, layers of roofing material cover the brick vaults, blocking the “lights.”

For several decades, state employees enjoyed convenient grab-and-go meals and sit-down service at the Capitol Restaurant and Cafeteria. Constructed in the courtyard in 1923 and managed by local restaurateur Peter Giftos, the cafeteria also hosted office get-togethers and parties.

It wasn’t the first eatery in the building, however. The third-floor rotunda space housed a restaurant and barber shop in the early 1900s before being converted to a space used by the Legislative Correspondents Association (LCA).

The state opened the Capitol to the public in the 1870s, continually making newly constructed areas available to visitors. On August 4 and 5, 1885, thousands of people filed in during the evening and through the night to pay their respects to President Ulysses S. Grant, whose body was lying in state.

President Grant died at a Mt. McGregor cottage in nearby Saratoga County, and his funeral train brought his body up State Street, where mourners, many of whom had served in the Civil War or lost loved ones to it, bowed their heads in solemn thanks to the general who helped end the costly conflict.

Right: One of the first passageways through the Capitol courtyard can be spotted behind the president's casket in 1885.

This page is available in other languages